…are a network of volunteers in England Athletics affiliated clubs and RunTogether groups promoting mental wellbeing through running and supporting the aims of #RunAndTalk.

At Horsham Joggers we now have 5 appointed Mental Health Champions: 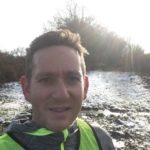 “ Hi – I have been a member of the club since 2016, and in 2019 joined the committee in my role as a Mental Health Champion – it’s been great to see what goes on behind the scenes and meeting the people who make everything happen for us as club members.

I initially joined Horsham Joggers to add some more structure to my training, but have gained so much more and met some lovely people, I really enjoy the social aspect of running with others.

For me, running provides valuable ‘down time’ and helps to clear my head either before or after a busy day. There’s no doubt that when I exercise I am more productive, and I’m in a better frame of mind both at work and at home.

We hope that being a part of the run and talk programme will encourage people to share their experiences, help improve wellbeing, and play a positive role in the club and wider Horsham community”. 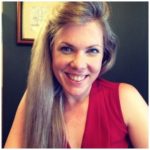 “ Hi I’m Geri and I’ve been a Horsham Jogger for 4 years and running for 6 years. I first started running as a way to raise money in memory of my son and to get fit.

When we moved to Horsham in 2014 we knew very few people in the area; and I made the ‘scary’ decision to join a ‘running club’ – Horsham Joggers. I can safely say this is one of the best decisions I have ever made. I’ve made the most fabulous friends, gained a wonderful HJ family and a total sense of community!

I wanted to be part of the run and talk project as running has helped my mental wellbeing – be that dealing with grief or anxiety. Running and running communities have enormous potential to support natural healing from being around likeminded people, being outside enjoying our beautiful West Sussex countryside and of course talking (and eating cake!) ”. 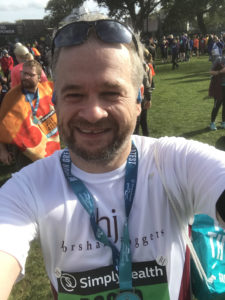 “Hi – my name is Roger. I’ve been a Horsham Jogger since 2016 and absolutely love the club and only wish I’d joined it earlier. I’ve always been into running and find it a great way to deal with everyday stresses as well as improving fitness.

Like Geri, I’ve made some great friends through the Club and also Horsham Parkrun. There’s a great sense of community at Horsham Joggers and it not about being the fastest or best runner.

Run and Talk is something that means a lot to me. I’ve always suffered from depression and it’s a horrid place to be. However, I have found that running can sometimes be the best medicine and speeds up recovery. Hopefully, taking part in Run and Talk will help others in a similar position”. 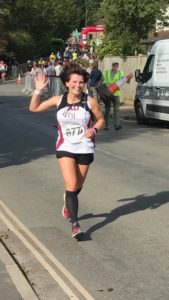 “Hi, I’m Ali, and back in April 2017 I made a brave move to turn up to my first Horsham Jogger Tuesday night meet, having decided after watching the London Marathon I would like to run it the following year.  Up to this point I had not been a runner (jogger) for any part of my life having only ever completed a 5K Race for Life or two.

I instantly had so much support and a whole bunch of new jogger friends. What I loved most was getting to the stage where I was able to jog and chat at the same time.  The feeling you have after each meeting was additive. I am by no means a fast runner, quite the opposite in the slowest group, but I love it.

I have recently become a Mental Health first aider where I work, and was really keen to be able to help others with a listening ear or two, whilst doing my favourite hobbies of running and talking”. 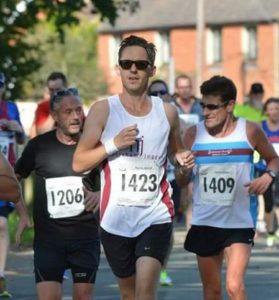 “Hi Everyone, I’m Mike. I joined Horsham joggers in April 2016, a few months after we moved from London to Horsham. I hadn’t done a huge amount of structured running previously but it looked like a good way to meet people so I turned up at the track one Thursday and ended up running 400m paarlauf with (then chairman) Phil. It was my first time on a running track and I loved it. Then came Parkrun, and Barns Green, the South Downs Way Relay, new friends, and the pleasure of running in company. Now I can’t imagine life without it!

“Being able to talk freely, and to have someone listen openly and without judgement is something from which we can all derive great benefit when things get challenging. And there’s something about running together, side-by-side, which helps create a shared perspective. Running is very important to my mental wellbeing and I hope to be able to combine these two things to try and offer a little support wherever it may be needed.”

Our Mental Health Champions commit to:

Very large numbers at track yesterday evening. Hot, but with a great atmosphere. Both groups were doing 200s. The coached group smashed their drills and a few gave their new shoes a workout! Well done everyone!

Some great running from three Horsham Joggers teams at the Endure24 event last weekend. They ran a *lot* of miles continuously over the 24 hours! Well done everyone!