Sussex Newspapers group arts editor, Festival of Chichester chairman and marathon runner Phil Hewitt is beating back the demons with a new book which celebrates the massive mental health benefits of running. He will be talking about the book, Outrunning The Demons (Bloomsbury, 2019), at The Bridge Leisure Centre, BBH on Thursday 21st November, 8pm. 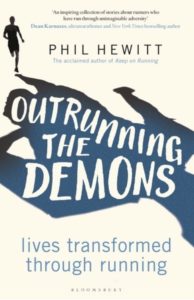 As Phil says: “Running can take us to fantastic places. Just as importantly, it can also bring us back from terrible ones. For people in times of crisis, trauma and physical or mental illness – when normality collapses – running can put things back together again.” After watching a cricket match in Cape Town, South Africa, three years ago, Phil was mugged – stabbed, punched, kicked and effectively left for dead in a grim, desolate suburb.
Astonishingly, just as he could feel himself starting to drift away, he was scooped up and whisked to hospital by a passing pizza delivery driver. Two deep stab wounds, 15 stitches, three broken ribs, battered liver and stomach, bruised all over.

Phil resolved to put himself back together again by getting back to his first love, running…. And it proved a remarkable way to outrun the demons of PTSD and his blood-soaked pavement. Which is why it became the title of his new book – Outrunning The Demons.
In it, Phil tells of his own experiences and their aftermath – and also interviews 34 people from around the world who, as he says, have been to hell and discovered that the surest, safest, quickest way back was to run.

He interviewed people caught up in 9/11 and the Boston Marathon bombing; people who have lost loved ones to murder and natural causes; people who have suffered addiction, alcoholism, anxiety, depression, violent and sexual assault; sheer bad luck – and even a nose-diving jet. The result is a remarkable collection of stories about hope and survival – a genuinely uplifting celebration of the strength of the human spirit and all the good that is unleashed simply through running.

This will be a free event for members, but due to limited spaces you will need to book your place by contacting Mark Aylmore at HJRunAndTalk@gmail.com.

We will be incorporating #RunAndTalk runs into the club programme from September onwards, with various themes.

These will be open to everyone, with more information coming soon.

As a club we will also be participating in 2 national campaigns, Time to Talk Day (January/February) and World Mental Health Day (October).

Marathon Training, Sunday 26th. Meet at The Bridge for an 8am start.

Thanks to Alison for last week. This week is 12 miles with route provided by @clivewalker
https://t.co/efBz3XjyoG

Get your £20 discount code for the Leader in Running Fitness course now! Only valid today until midnight on Sunday 26th, simply enter the code NRS2020 on the booking page 👉https://t.co/6rFBoLJPtv
Come and see us at the
@nationalrunshow over the weekend for more info!